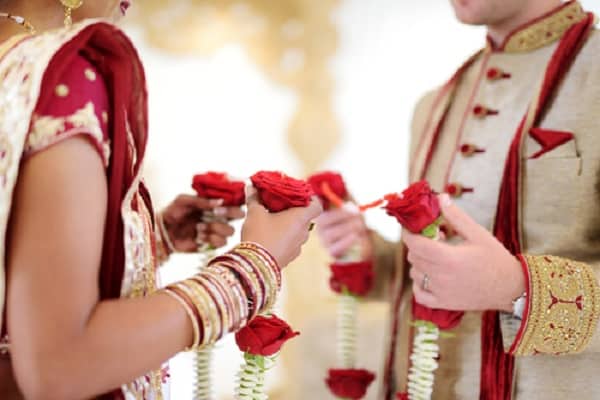 At what age marriage is considered the curious case of delayed marriage?

Our life’s decisions are a matter of preference, not the principle, we give preference to other matters, marriage is delayed due to one reason or another.

One of famous marriage quotes states that “Marriages are made in heaven”.

1. In my opinion, if one or more of these planets, Jupiter has the special significance of being the husband for the female, Venus has the significance of marriage for male, along with Lagna or Lagna lord are powerful in the birth chartA diagram showing exact position of planets in signs at time of birth of an individual prepared with the help of time, date and place of birth More, a person will have a blissful married life.

2. Beneficial planets are posited in Kendra or Trikona in the astrological birth chart with no maleficUnfavorable, opposite of benefic More aspect, marriage will not be delayed.

Unfortunately, due to various unavoidable factors, sometimes there is delay in marriages. So the people often ask the questions, why there is a delay in  marriage.

What are the preventive measures he or she has to take to avoid any delay?

The answer to this question is not simple and may include many logical factors such as:

1. Unwillingness to marry due to the financial problems,

2. The uncertainty of jobs in the IT sector or Multinational companies,

3. Unnecessary delay in starting off a career,

4.The job of the individuals in different locations, inability in taking quick decision.

5. The preference to build a career. Today, delaying marriage has become an increasing trend among women and men in a career in the United States because they give preference to the building of their career.

6. But the one mystical factor that could also play a big role in the delay of marriage is astrologyThe study of the influence of celestial bodies on earth and humans More compatibility by date of birth, i.e. numerology, sun sign astrologyPrediction based on solar return chart for the day, month and year, mainly used in magazines and newspapers More or horoscopeSynonym of birth chart, prepared with date, time and place of birth of an individual More matching.

There are many factors I would like to mention here which may cause a delay in the arranged marriage of a person, they are as follows:

These factors for delayed marriage are as follows:

1. Misconception or dilemma about marriage.

8. Marriage proposals are not satisfactory.

10. The responsibility of the family members.

13. Financial problems or debts. 14. The difference in financial status.

16. Old traditions and superstitions in an arranged marriage. 17. Dowry system in India.

18. Non-tolerance of inter-caste or inter-religion marriages in India.

1. Influence of more than one natural malefic planets on the 7th house:

3.The position of 7th lord in bad houses or malefic planets in 7th house:

Lord of malefic housesThese are twelve sections of zodiac circle having 360° numbered clockwise Ascendant is known as the first house and the last house is known as the twelfth house Each house represents specific traits used for prediction. More posited in 7th house, lord of the 7th house placed in bad houses (6th, 8th or 12th house).

4.The aspect (Drishti) of malefic planets on bad houses:

The connection of 7th house in a native’s birth chart, due to the aspect of malefic planets(Sun, Mars, Saturn, Rahu) with the following houses:

(i) aspect (Drishti) on the 7th house

(ii) aspect or Drishti on the 8th house.

(iv) aspect or Drishti on the 12th house.

The connection of  7th house with Saturn, Rahu, Mars or Sun due to their position in 7th house or Kalatra Sthan, which signifies a person’s spouse or marital life.

Mars, Saturn or Rahu posited in places: 1st, 4th, 7th, 8th or 12th(Manglik dosha in case of Mars) may be a common cause for a late marriage.

AscendantRising of a zodiac sign on the eastern horizon at the time of birth, placed in horoscope of a native, as 1st house is most important in calculation and prediction More stronger than the seventh house and either seventh house or seventh house lord hemmed between the Paap Graha (Pap-Kartari Yoga).

Due to all the planets hemmed between Rahu or Ketu i.e. presence of Kal Sarpa Yoga in the birth chart.

9. Relation of Venus, Moon or 7th lord with Papgraha in any house:

If weak or ill-placed Moon, Venus or seventh lord having their connection with Rahu, Ketu, Saturn or Mars are present in the birth chart of the nativeOne who takes birth, this word is used for astrology purpose More, marriage may be delayed.

TransitMovement of planets in the sky in real time More of planets in unfavorable houses may play an important role in delayed marriage:

11. Dasha or Antardasha of unfavorable planets or Papgraha in progress:

Planetary Dasha or Antardasha of Rahu, Saturn, or lord of 8th house is in Progress.

If  any of the following Ganda Mula Nakshatra are present in a horoscope:

Pitra Dosha is also a factor for delayed marriage.

If synastry or Kundali matching is not proper.

Weak and DebilitatedA planet posited in specific degrees in a sign with fall in power and energy is known as its debilitated sign. This is the 7th sign from the sign of exaltation and opposite to exalted More Venus posited in the sign Virgo in any house.

An afflicted fifth house, the house for children, in a native’s horoscope, shows the delay in birth of children, is also a factor for delayed marriage

18. Role of the 2nd house, the house associated with family matters:

If the 2nd house is occupied by malefic planets or moon conjuncts Saturn in the 2nd house with no aspect of beneficPlanets having natural beneficial and positive influences, opposite to malefic More planets(Shubh Grah) such as the planet Jupiter, there are chances of delayed marriage.

Here I am making an attempt to reveal some detailed astrological reasons for delayed marriage, one of the important Dosha is known as Kalathra Dosha:

Role of 7th house which is associated with the marriage, married life of a person or the 7th house lord in one or more following combinations:

Planets in the 7th House and there is no auspicious planet (Shubh Graha) present in Kendra or Trikona:

If the planet Saturn is posited in 7th house, afflicted by other malefic planets, have no auspicious aspect of Shubh Graha, effects are as follows:

i) When the planet Saturn combines with the moon and the sun in the 7th house with no beneficial planetary aspect, then a delay in marriage is said to be on the cards.

ii) Another factor that could lead to delayed marriage is when Saturn is placed in the 7th house from the Sun, it forms a “Samsaptak yoga” with the Sun and there is no favorable aspect.

iii) Additionally, another reason for a delayed marriage could be due to Saturn and Moon forming Samsaptak Yoga or combining together in the 7th house in a birth chart or Janam Kundli.

There are other reasons such as when the birth moon is posited with the malefic planet Saturn in the 7th house and the 7th lord is placed in the 12th house, a delayed marriage may be predicted.

Also if the 5th house lord and the 7th house lord mutually aspect each other or conjunctTwo planets posited close together, in the same sign More together and there is no aspect of the Shubh Graha, then a love marriage or an inter-caste marriage may be predicted with some problems, though delayed.

If the planet Venus is debilitated or conjuncts the sun (Venus in combustion) and the moon in 7th house a late marriage is certainly on the cards. The possibility of late marriage is even indicated when:

Planet Venus or the 7th house is in “Paap Kartari Yoga” (hemmed between Papgraha).

Also, it is said that Venus is an enemy of the sun and the moon. Therefore if Venus is placed with the malefic planets in the sign of the sun or the moon, i.e. Leo and Cancer then a possibility of a delayed marriage may be predicted.

So with the reasons behind a delayed marriage being spelled out, the question to be asked is what are the remedies to this problem?

Ways to get married quickly, some simple remedies for delayed marriage

Actually, it is never too late to have a happy marriage.

Firstly, if various Vedic mantra, Durga Shaptashati or Hanuman Chalisa are available, one should recite daily, if possible.

You can Worship and pray to Ganesha, Lord Shiva and Goddess Parvati or Lord Krishna, especially keep fast and offer Jal (holy water) to Shivalinga on Mondays in the month of Shravan or on Maha Shivaratri.

Do charity or donation (Daan) in form of food(Anna) and clothes (Vastra) to needy persons, these are good Karma, can also help in removing all kinds of Dosha and the issues of delayed marriage.

Pitra Dosha remedies are also helpful. Consult a good  astrologer. You should not waste too much of your hard earned money for performing Puja and Dakshina. Just keep away from an imposter (Dhongi), instead.

If the delay is due to the Manglik Dosha you should do the remedies for Mangal Dosha (Mars).

If the present ruling Mahadasha or Antardasha are favorable in the horoscope/ the planetary transits are favorable or your sun signs are matching in both the horoscopes, you should immediately try to avail the opportunity with positive thinking and try your best to find the suitable partner.

I would recommend you to take the decision at the right time. Find a suitable partner, choose a Shubh Vivah Muhurat when you are going through the favorable planetary transits and the auspicious Dasha and Antardasha periods.

Lastly, you should not miss the opportunity, move ahead to enjoy marital bliss by God’s grace, during a favorable period.