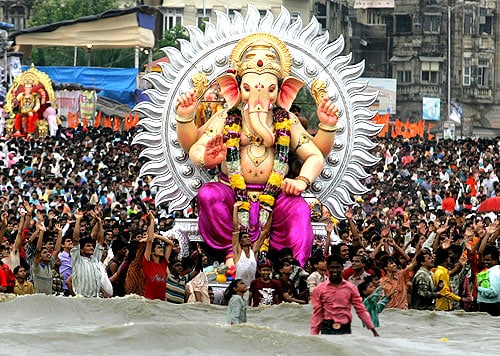 God Ganesha is the God of wisdom, prosperity, and fortune. Lord Ganesha, the most adored God, brings together people of all religions.

People are celebrating the auspicious festival on Wednesday, August 31, 2022, throughout India and other countries.

Lord Ganesha will stay with us for the full eleven days. Puja will be performed daily. The festival ends on Friday, September 09, 2022, on Anant Chaturdasi with the Visarjan of the idol.

The Tithi of the celebration of the Ganesh Chaturthi festival is on the fourth day of the waxing moon. Actually, it is the Shukla Paksha Chaturthi in the lunar month Bhadrapada, in September. This auspicious festival falls once a year.

The elephant-headed Lord Ganesha is considered the remover of all the obstacles, known as Vighnaharta. That is why people worship Lord Ganesha always first and remember God Ganapati before starting any auspicious event or venture.

It is a ten/ eleven-day sacred festival.

People celebrate it in Maharashtra, Madhya Pradesh, Chhattisgarh, and Gujarat as a public celebration.

But in Goa, Uttar Pradesh, Tamil Nadu, Andhra Pradesh, Karnataka, Telangana, Kerala, and other parts of eastern or north India, people mostly celebrate it as a private celebration.

People of India, Nepal, and other parts of the world also observe it with great enthusiasm.

The date for bringing the idol of Lord Ganesha to the place of Ganapati-Sthapana is Vinayak Chaturthi, Wednesday, August 31, 2022.

People are involved in lots of activities, from house cleaning to decorating, seven days before bringing the home idol of Lord Ganesha, during Ganesh Chaturthi.

You may use the papercraft for decoration of your home or Puja Pandals during the Ganesh festival by making flower bouquets or decorative art pieces. These are eco-friendly and free from pollution.

Preparing different kinds of Modak, the special sweet for Bhog

People prepare Sweets and Modak, a special sweet, for offering Bhog to Lord Ganesha. They purchase new dresses for this occasion. Women buy ornaments and dress up gracefully during Ganpati Puja.

People offer Jal, Modak, and sweets as the favorite Bhog of God Ganesha and his mother Gauri.

They perform Arti and distribute Prasad to the people present there during Puja.

During the auspicious occasion, people perform Gauri Avahan and Puja on the third day of the ten-day Ganesh Chaturthi puja.

People will bring home the idol of Goddess Gauri on 3rd September 2022 for Avahan and perform Gauri  Puja on September 4, 2022, and keep it in the home for three days, till September 05, 2022.

According to the belief Gauri or Goddess Parvati, the mother of Lord Ganesh comes in search of her son Lord Ganesh and brings prosperity and peace with her.

After Goddess Gauri finds her son, blesses us, then returns to her home happily, in the Himalayas.

A pandal or a temporary stage is prepared and decorated with flowers and lights. Pujari (priest) performs Ganapati Puja, in four steps, on this stage, on auspicious Ganesha Chaturthi or Ganesh Chauth.

The first step is Pran-Pratishtha starts with invoking Lord Ganesha at noon(Madhyahna-Kaal). Devotees stand in Avahan Mudra (join both palms together).

They chant Mantras from Ganesh Upnishada or hymns from Rigveda and other ancient texts, in front of God Ganesha and take Sankalp.

Ganapati-Sthapana Muhurat is early in the morning on Wednesday, August 31, September 2022.

The second step is Ganapati-Sthapana( installing Ganesha) in the auspicious Labh Muhurat and Amrita Chaughadia.

The Puja starts with the bringing of the idol of Lord Ganesha and installing on stage or performing Ganesh-Sthapana (Avahan) on a decorated Pandaal (stage) or at home.

The next is Shodshopachar Puja, before starting this Puja, people should keep fast, do Deep-Prajvalan (Lighting Deepak) and perform rituals with prayers. Devotees should chant Vedic hymns from Rigveda and other Hindu texts to please Lord Ganesha.

People distribute Prasad in form of fruits, dry fruits, Gur, coconut, and other sweets, including Laddu and Modak (made of rice flour, Gur, and coconut in a particular shape) daily among the devotees after Arti.

In the fourth step, Uttar Puja is done, wherein the idol of Lord Ganesha is shifted to another place.

One can see feasting and they enjoy large groups of people everywhere, martial art competition is also held for youth and children.

Muhurat, Time for Puja, and other rituals for Ganesh Chaturthi

Chauth or Chaturthi Tithi begins on Wednesday, August 31, and ends on September Friday 9, 2022.

Devotees should prefer Puja at noon (Madhyahna-Kaal) for starting Ganesh Puja rituals as Lord Ganesha was born during Madhyahna-Kaal.

To avoid any false accusations of stealing something (Mithya- Kalnka or Dosha), avoid moon sightings on Ganesh Chaturthi or Ganesh Chautha.

When should the Moon sighting be avoided?

Ganesh Visarjan is performed on Anant Chaturdashi or Anant Chaudas

The Ganeshotsav ends after ten or eleven days on Anant Chaturdashi (Anant Chaudas) on Ganesh Visarjan day, the last day of the festival.

This year Ganesh Visarjan will be on Friday, 09 September 2022.

Devotees carry the idol of Ganapati Bappa in a grand public procession through the roads and streets in different groups of rich and poor with music and chanting.

During the procession, they request Lord Ganesha to come back early, next year (‘Ganapati Bappa Morya, Pudhchya Varshi Loker ya’ in Maharashtra).

Then they immerse the idol into the water of a lake, river, or ocean, assuming that Lord Ganesha has returned to his home, Mount Kailasha to meet his parents Goddess Parvati and Lord Shiva.

The dates for Visarjan or immersion for the idols of Ganapati, which people brought home:

They perform Visarjan according to their personal preference but follow a schedule. The immersion will be on selected days. The days are as follows:

One and a half days, the third day, the fifth day, the seventh day, and Anant Chaturdashi. The starting day is September 1 and the last day is Friday, September 9, 2022.

The date for Gauri Visarjan 2022

When or how was the Ganeshotsav celebrated for the first time as a social and public celebration?

It is not known when or how Ganesha Chaturthi was first observed for the first time.

The celebration of Ganeshotsav for the first time began as a social and public celebration in Pune. Shivaji had appealed to the Maratha people after the Mughal-Maratha wars.

It was against the British government’s ban on Hindu gatherings during the British regime.