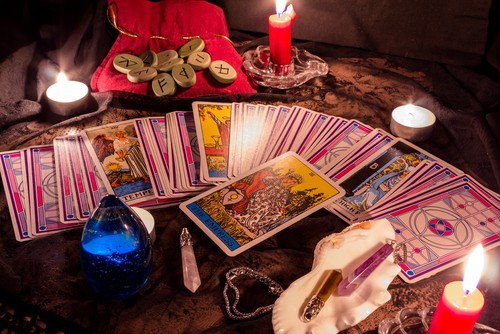 Tarot is also known as Trionfi, Tarocchi, Tarock. The Tarot is a kind of playing cards pack that is used for predictions that are easy to learn, popular, and most commonly used by many mystics and occultists to predict.

The Tarock or tarot cards initially were created to be used as playing cards in a game similar to the modern-day bridge during the 15th century.

Tarocchi or Tarot cards are available now at an affordable price with the use of printing machines.

Tarot cards or Tarock cards consist of pictures of suits of cups, swords, etc. Later on, the queen and trumps (wild cards that are unique to tarot) were added to the playing deck which is 78 cards in total.

Each suit is made up of 14 cards, a total, of 56 cards, 1 to 10 numbers beginning with the Ace( number 1), progressing through number 10, and concluding with four face cards:  Knight, Queen, King, and Jack.

There are 21 trump cards and 1 Fool card(most significant).

Each of these suits represents a significant theme with a particular approach to life.

Tarot card decks are comprised of 78 cards. They are divided into a Major Arcana (22 cards) and a Minor Arcana (56 cards).

The Major Arcana card is also called Trump cards (21) and single card (1), known as The Fool, thus totaling 22. They are important because they represent major life events on a larger scale.

This Major Arcana card starts from the beginning (the innocent, The Fool) to the end (The World, a card of completion).

The individual is also asked to concentrate intensely on the issue which requires guidance while shuffling the cards.

After the shuffling of tarot cards is completed and the deck has been cut the cards are laid on the table using a pattern called “spread”.

The type of spread selected mainly depends on the type of question that has been asked.

They are many types of spreads and they include Tetraktys, Double Cross and Triangle Spread, Celtic Cross Spread, Astrological Spread, Relationship Spread, etc.

The most commonly used spread

One of the most commonly used spreads is called the “Celtic Spread”, which uses ten cards.

This spread is very popular because it is designed to answer questions related to a wide range of aspectsAngular distances between planets, based on zodiacal longitudes, calculated in specific degrees, viz trine, square, represent relationship between two planets Planets generally influence 3rd, 5th, 7th, 8th, 9th and 10th house due to their aspect of an individual’s life.

Apart from the position of the spread tarot cards also have meaning which includes death which means the end, The Fool means beginning, faith, and innocent.

How to become a tarot card reader?

While anyone can become a tarot card reader by reading a large number of books.

To become an official tarot reader one needs a certificate for a tarot card reading course. These are either available online or through Tarot card Reading institutes.

These institutes hire Tarot card teachers in order to give knowledge of tarot card reading to those who want to learn.

In a life full of stress where people want to know about their future, Tarock or tarot reading prediction has become necessary for them.

Tarot reading has provided a channel through which people can have a look into their future through predictions.

Although it would be prudent not to have blind faith in Tarot card reading for interpretation because “Tarot Reading” after all is not an exact science.