Chaitra Navratri, Basant Navratri or Vasant Navratri, Gudi Padwa, Ugadi one of the three and a half significant periods or Sade Teen Muhurat to start an event or a venture. People keep Navdurga Vrat, perform Puja, Havan or Homam to please nine forms of Ma Durga.

Chaitra Navratri begins on the first day of waxing moon or Shukla Paksha Pratipada in the lunar month of Chaitra. This ends after Ram Navami Havan, which is  on Sunday, 10th April, 2022 on Ram birth anniversary. (The last day of Navratri Puja is called Navratri Paran, after nine day’s fast on Monday, 11th April 2022.)

Generally Maa Durga’s vehicle is lion. It is believed, it keeps changing when Maa comes on earth.

Maa Durga arrives on Saturday, on April 02. This means she is coming on a horse.

Results of arrival on horse:

The arrival on horse is not considered auspicious. There will be unrest instability in society, upheaval in power, war or war like situation among countries.

Maa Durga departs on Sunday, this means Maa is going back on a buffalo.

Results of departure on buffalo:

This departure is also considered inauspicious. There will be sorrow, through increased health problems, outbreak of an epidemic or natural disasters.

We can get Maa’s blessings by performing Puja,Vrat and other rituals. The ill effects and inauspiciousness will be minimised.

It is observed as Jhulelal Jayanti or Cheti Chand by Sindhi people on the second day of Chaitra Shukla Paksha, or Navreh, as Sajibu Nongma Panba, Cheiraoba, Rongali Bihu in North-East India.

The Hindu Nav Varsha or New Year, based on Solar calendar is known as Vaisakhi in Punjab, which is to be observed on 14th April, 2022. Pana Sankranti in Orissa and pohela Boishakh (Naba Barsha) in West Bengal (on 15th April), Puthandu in Tamil Nadu, Bihu in Assam and other north-Eastern states.Though the dates for these festivals are different.

Himachal Day and Good Friday will be celebrated on April 15, 2022.

The pleasant season due to the Sun’s influence on earth with the end of spring and the beginning of autumn is considered significant and auspicious for the devotion of Lord Rama and Goddess Durga (Goddess of Shakti).

Worship or Puja of Lord Ganesha is performed first.
During auspicious occasion of Chaitra Navratri or Vasant Navratri and Sharad Navratri, nine forms of Goddess Maa Durga are worshiped.

The method of Kalashasthapana, step by step and the list of items required for Puja are available in the article ‘Kalashasthapana Or Ghatasthapana/ Navratri’ on this site Astroask.com.

On Chaitra Navami, the last day of Navratri, Maa Siddhidatri (all the nine forms of Maa Durga) is worshiped by chanting Mantra ”Om Siddhidatri Durgayai Namah!!”.

Havan is performed with barley and black sesame seeds (Jau and Til). Nine or eleven children (seven or nine girls and at least two boys) are invited for feast or Kanya Bhoj at devotee’s house.

They are given money and clothes as a donation. Kalash and Nariyal (coconut)are removed from the place of Kalasha Sthapana, the holy water of Kalash is sprinkled on Gudi Padwa or Samvatsar Padavo 2022/ Vikram Samvat 2079 in all the parts of the house for Maa Durga’s blessings.

This Chaitra Shukla Paksha Navami is also celebrated by Hindus as the birthday of Lord Rama, known as Ram Navami festival.

Generally, Puja and Havan are performed after 12:00 PM till 1:00 PM, by reciting Bal Kanda from Ramayana in most of the cities of North-India and different parts of the world.

Gudi Padwa is one of the auspicious Sade Teen Mahurat falls under the significant Sadhe Teen Muhurat Akshaya Tritiya, Gudi Padwa, Vijaya Dashami and half of Bali Pratipada.

Gudi Padwa is observed by Maharashtrians and Konkanis as the first day of the year, based on Luni-solar calendar or Surya Siddhanta.

Gudi Padwa begins with ritual oil-bath followed by prayers. Oil bath and eating Neem leaves are the most important rituals suggested by scriptures. North Indians also eat Neem with Mishri on the first day of Navratri.

The Gudi Padwa celebrations were started by the great warrior, Chhatrapati Shivaji after his victory, it symbolises victory or ‘Vijay Dhwaj’.

Ghatasthapna Muhurat 2022 for Chaitra Navratri, Gudi Padwa, Cheti Chandra, Ugadi is the same, observed according to the local sunrise of that place. It should be done before the Hindu midday during Tithi Pratipada.

The most preferred auspicious Muhurata for Ghatasthapana or Kalashsthapana is as follows:

Auspicious Ghatasthapana Muhurata for Navratri Puja, Gudi Padwa and Yugadi is from 06:22 AM to 08: 31AM (I.S.T.) after sunrise on 02-4-2022, during Brahma Muhurat and Meen Lagna (DvisvabhavaRashi).

Usually, the 9th and last day of Navratri is observed as Ram Navami.

The dates or Tithi and the days or Var for the worship of nine forms of Maa Durga Chaitra Navratri April 2022 according to Hindu calendar 2022 are as follows:

Repeat this Navarna Mantra of Goddess Durga for 108 times.

Each Mantra of Durga is repeated 108 times at each sitting during the period of Navratri, dedicated the day for Navratri and respective prayers are as follows: 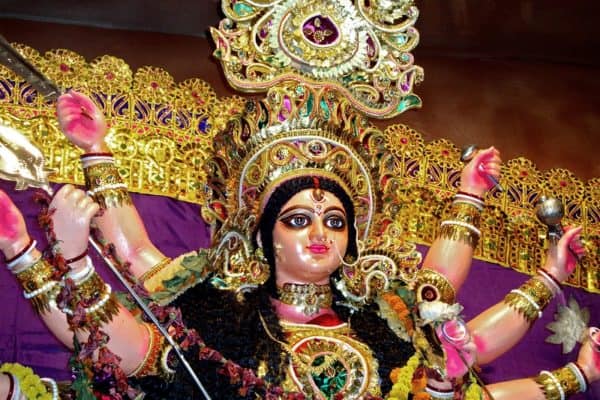